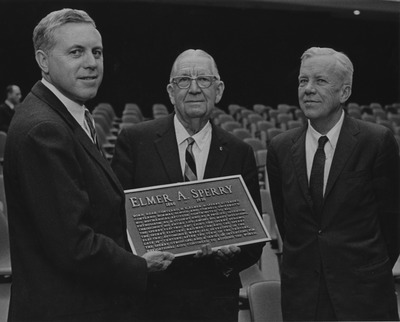 Elmer Sperry Plaque dedication with President Kenneth Young with two other gentlemen. The plaque says: "Elmer A Sperry 1860-1930. Born near Cortland, NY, Elmer A. Sperry attended Cortland Normal School and Cornell University. His mechanical aptitude contributed to his enthusiasm as a student and as a prolific inventor throughout his entire life. Among his many inventions, the Sperry Electric Arc Light, the Sperry Dynamo, The Sperry Electric Railway Car, and the Sperry Electric Automobile were all developed in the late 19th Century. After the turn of the century, the Sperry Gyroscope and a series of inventions for navigational aids continued to astound the world."